IT jobs market in the United States: mid-2020 data 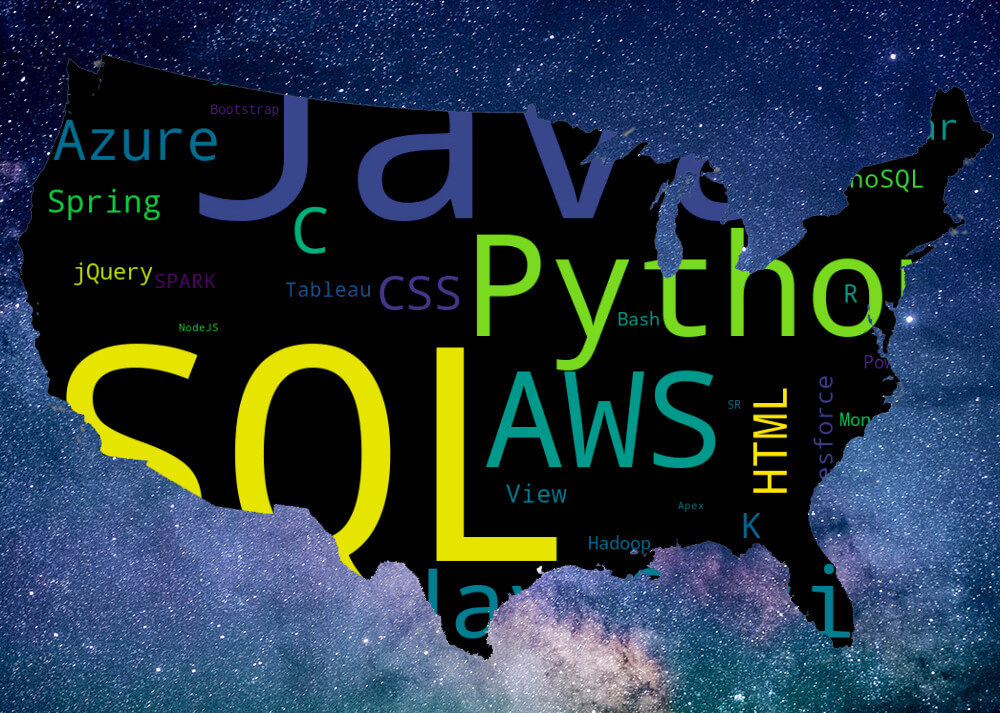 Although President Donald Trump has banned skilled foreign workers entering the country until at least the end of 2020 due to COVID-2019, the United States remains a desirable place for IT specialists from all around the world.

ITShifting.com has analyzed more than 100,000 IT job listings on Glassdoor.com to find out hiring trends to watch for in 2020 in the American tech job market. The analysis includes data for 33 IT occupations in the 25 largest US cities and surrounding towns.

Most popular IT jobs in the US

Top 10 IT jobs in the United States

Across the top 25 largest cities, software engineers and data analysts make the top two positions in most locations.

Unlike data analysts, data scientists make the top 5 jobs only in four cities: New York, Los Angeles, San Francisco, and Seattle — all of them being among the largest IT markets in the United States and the world.

Some IT jobs entered the top 5 city rankings only once in a specific location. For example, database administrators (DBAs) are among the top 5 occupations in El Paso, .NET developers in Jacksonville, scrum masters in Nashville, and technical writers in San Diego. 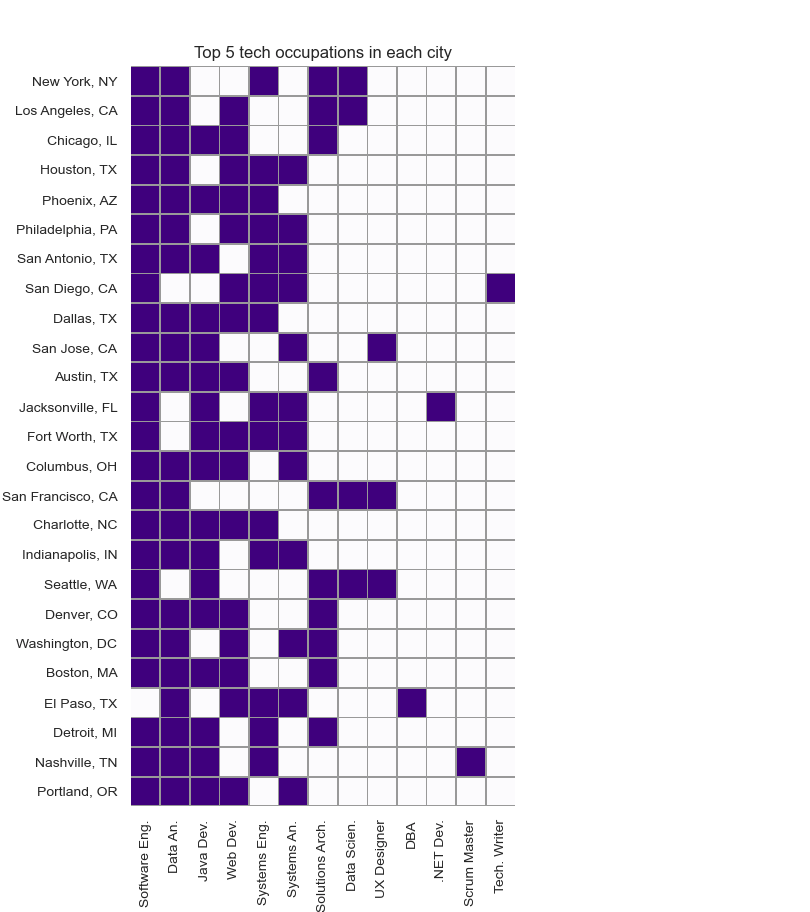 Average IT salary in the US

Actual salaries are rarely indicated in job listings in the United States. However, Glassdoor gives an estimate of the base salary range for jobs by looking at job-specific and company-specific attributes and other public and private data.

According to estimated salaries in the dataset collected by ITShifting.com, the average remuneration for IT occupations in the United States stands at $91,800 per year. (This is the arithmetic mean or the sum of all the salaries in the set divided by the number of salaries).

US cities with the highest IT salaries

Average IT salaries vary dramatically across the top 25 largest cities. The general (and quite obvious) trend is the following: the larger and more developed the IT job market is, the higher the IT salaries in the city are, regardless of the city’s size and population. 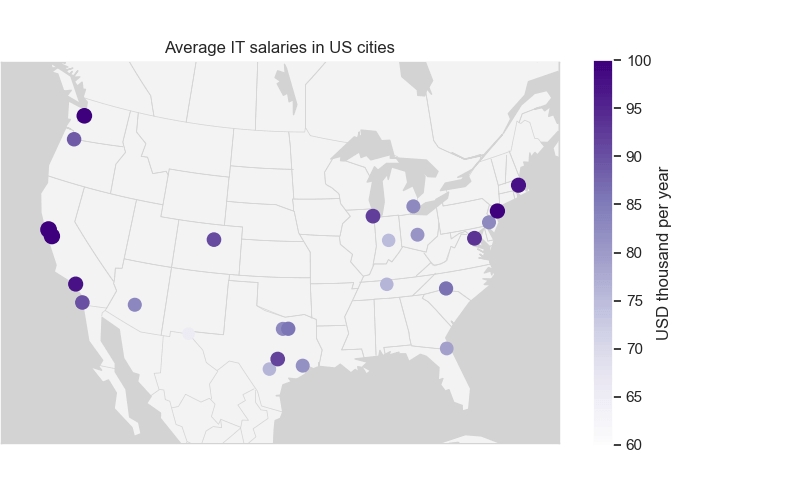 In New York, Los Angeles, Boston, Washington, DC, and Chicago, IT salaries are also higher than the national average of $91,800 per year. 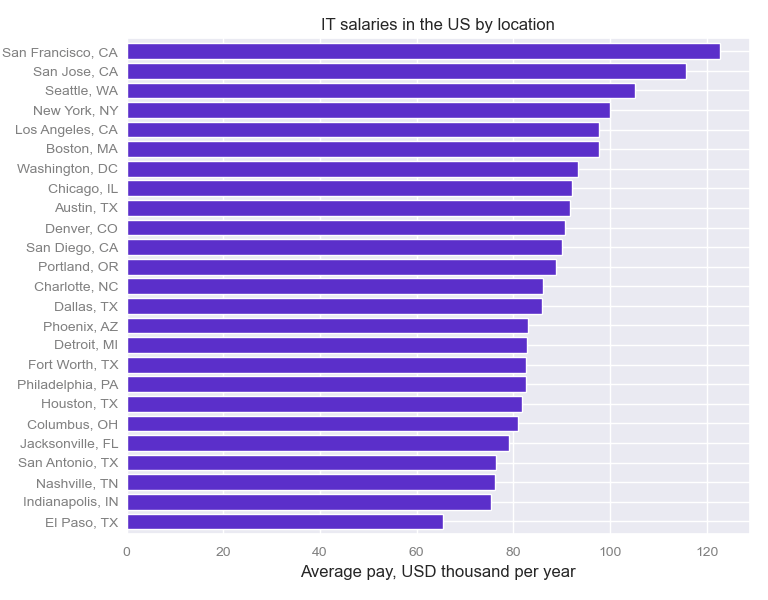 Jacksonville, San Antonio, Nashville, Indianapolis, and El Paso offer the lowest IT salaries among the largest cities. El Paso hits rock bottom in terms of the average remuneration for tech workers — $65,500 per year or almost two times lower than in San Francisco. This city in the far western part of Texas also offers the fewest number of IT job listings among 25 locations.

Other IT occupations whose average salaries are $100,000 or higher include engineers, namely cloud engineers, site reliability engineers, software engineers, and DevOps engineers. Like architects, engineers also design and plan while being aware of the “big picture”. Apart from architects and engineers, salaries in the range of $100,000+ are also offered to data scientists and scrum masters.

Salaries in the lower range ($80,000 per year or less) are offered to systems analysts, data analysts, technical writers, and technical support specialists. 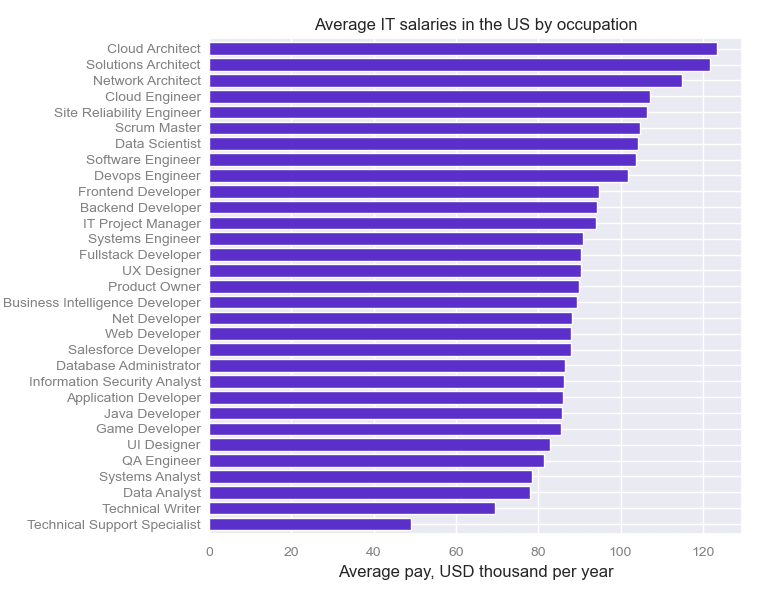 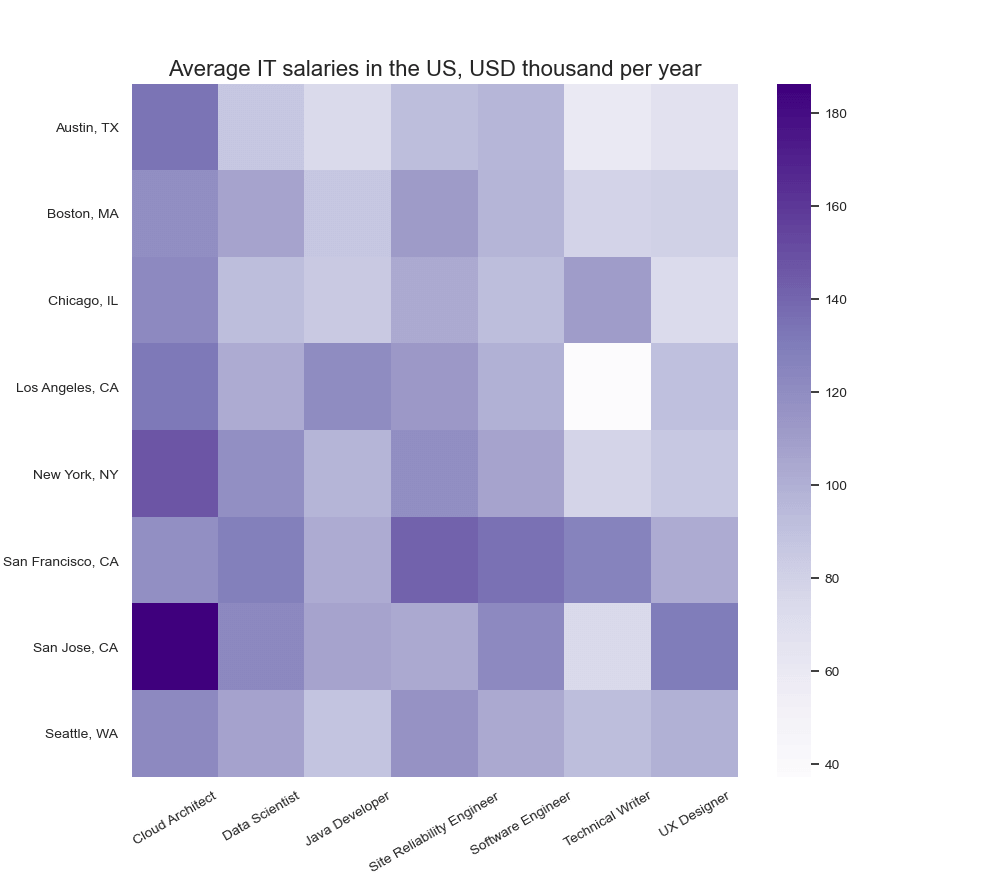 If you’re a cloud architect or UX designer, you can count on higher remuneration in San Jose, where the average pay for these occupations stands at a whopping $186,000 and $129,800, respectively.

Finally, if you’re a Java developer, you can choose to relocate to Los Angeles and hope for $120,700 per year.

Companies offering the highest remuneration to IT specialists in the United States are Cesna (a recruiting service), Align (an IT services company), and Resolute Technologies (an engineering consultant). Their average salary offers surpass $250,000 per year. Eighteen more companies offer salaries that average at $200,000 per year or higher. 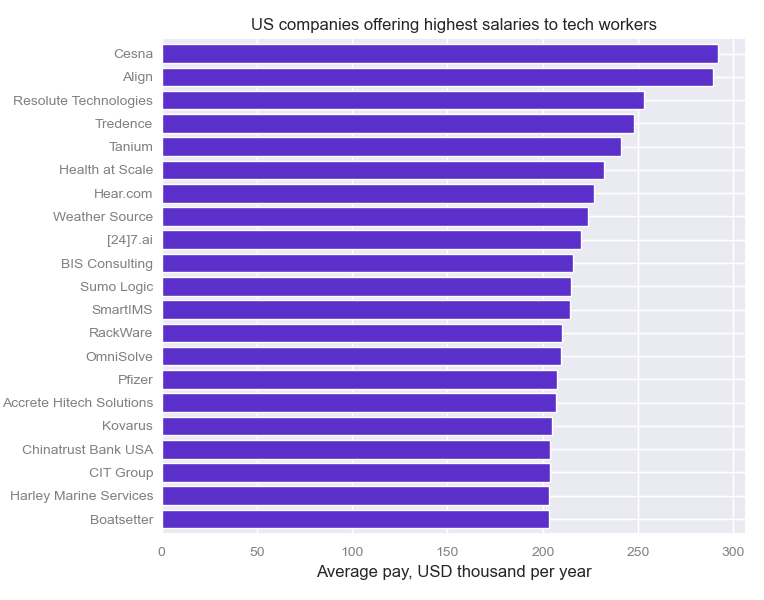 The most popular programming languages that can be spotted in job listings in the United States are Java, Python, JavaScript, C, Go, and .NET. 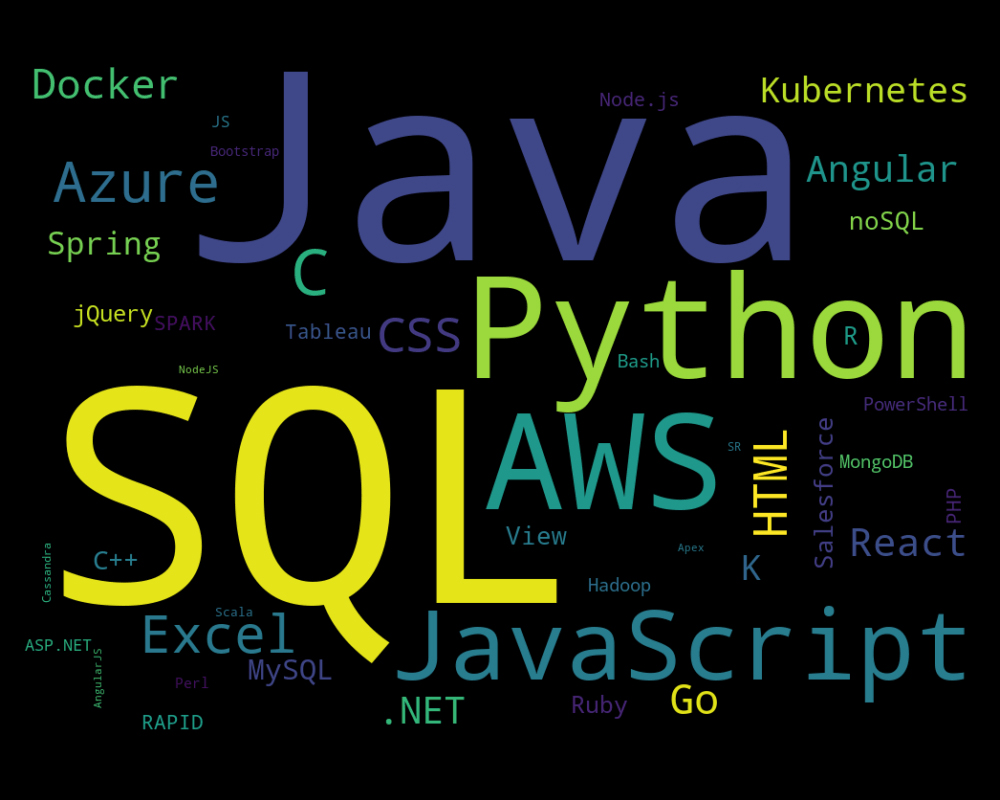 As to soft skills (or personality traits), the most commonly mentioned ones include “leadership”, “collaborative”, “problem solving”, “flexibility”, “accuracy”, “energy”, “teamwork”, “respect”, “creativity”, and “productivity”.

In other words, US employers tend to appreciate the ability to work in a team and solve problems, be collaborative, flexible, and respectful. At the same time, job candidates need to be creative, productive, and full of energy. 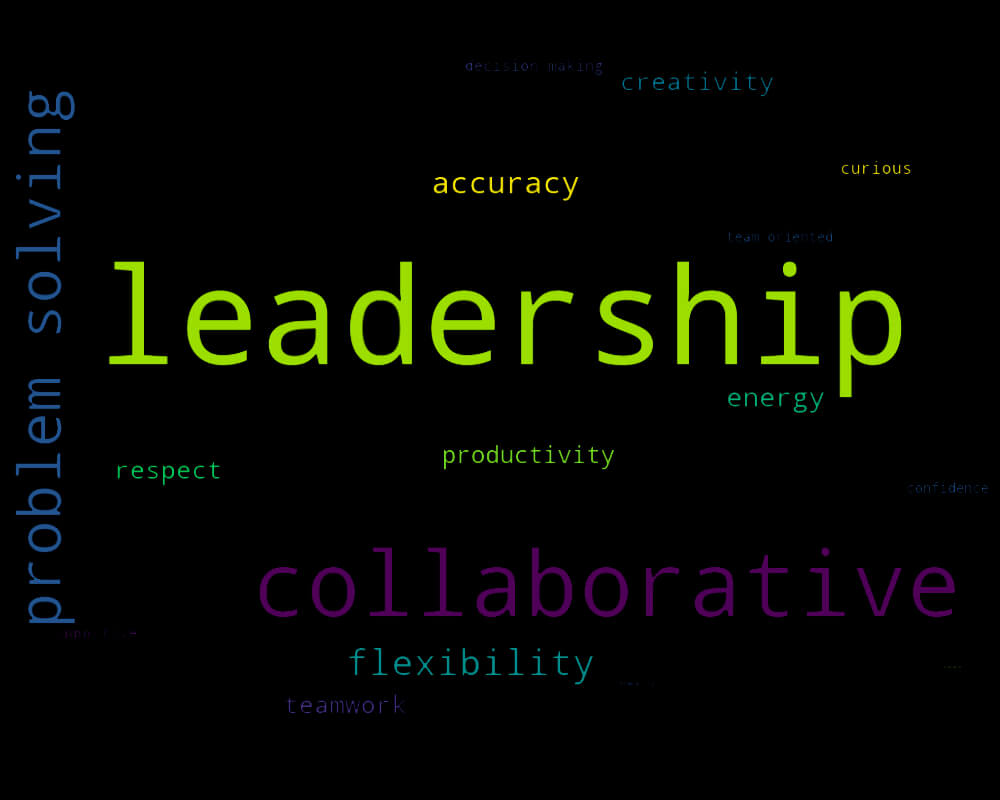 Setting aside the situation with the ban on visas for skilled workers, the IT jobs market in the United States remains highly attractive. When the world finally returns to normal, you may want to consider this country for relocation.

The key takeaway points are set out below:

Feel free to copy this report with an active link to ITShifting.com. Send any questions you have to info@itshifting.com.