IT salaries in Canada

According to the Organisation for Economic Co-operation and Development (OECD)’s data, Canada belongs to the top 10 countries with the highest employment income. And IT specialists are among the top earners. The bottom 10% of tech workers make less than C$55,000, and the top 10% of earners see their salary surpass C$140,000.

How much you can earn

Average IT salaries per month in Canada (CAD, before taxes): 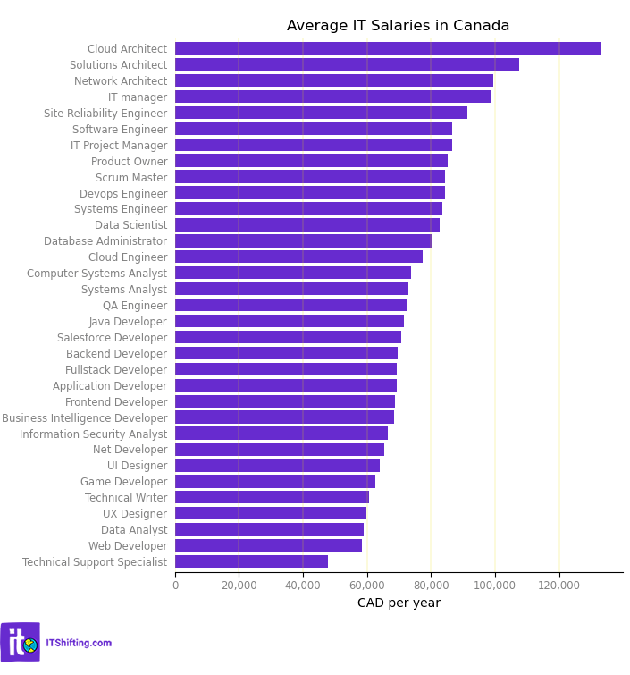 IT salaries in Canada (as in all other countries) depend mainly on the candidate’s experience (Junior: 1–3 years, Middle: 4–7 years, Senior: 8 years and more). Below are a few examples.

Average salaries for software developers in Canada (CAD per month):

Average salaries for web developers in Canada (CAD per month):

Average salaries for QA engineers in Canada (CAD per month):

IT salaries also vary depending on the location. For instance, IT salaries in Alberta and Ontario are above the national average and wages in Manitoba and Saskatchewan are below average.

Cost of living in Canada

The average IT salary of C$6,100 per month before taxes (≈ 25%) is enough to live a good life in Canada. The average expenses for a single person do not usually exceed C$2,400 per month. This sum includes the following monthly expenses (CAD):

Keep in mind that life in Alberta, British Columbia, Ontario, and northern territories is more expensive than in the Atlantic provinces and Quebec. Toronto and Vancouver are the least affordable cities in Canada.

Suburbs can be more affordable if you don’t mind long commute times and transport costs. The cost of a new car plus insurance and monthly fuel costs can reach C$1,000 per month (C$12,000 per annum).

→ Cost of living in Canadian cities