Home > Blog > Who receives H-1B visas to work in the U.S.: complete statistics and data

Who receives H-1B visas to work in the U.S.: complete statistics and data 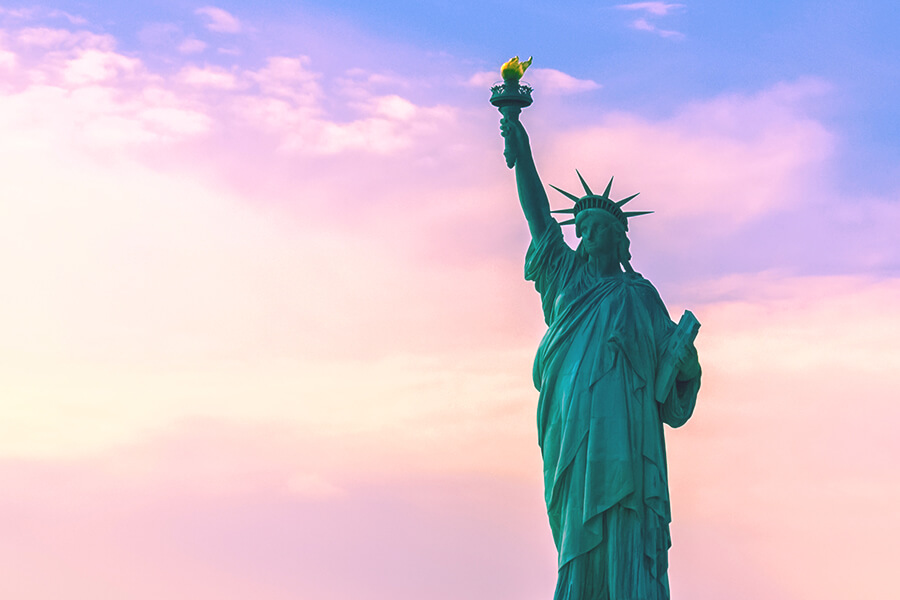 Until President Donald Trump has suspended H-1B visas, this visa program remained one of the most popular among international high-skilled workers.

H-1B is a nonimmigrant visa that allows U.S. employers to sponsor foreign workers to temporarily perform jobs in skilled occupations. These visas are rewarded on a first-come, first-served basis, or through a lottery based on the number of applications submitted to United States Citizenship and Immigration Services (USCIS). The duration of stay on an H-1B visa is 3 years, extendable to 6 years.

Number of visas issued in the last 30 years

The H-1B visa program was created in 1990 to fill gaps in the high-skilled job market of the United States. In total, almost 3.5 million H-1B visas were issued in the last 30 years, with about 116,000 granted to foreign workers each year on average, according to data by the U.S. Department of State. 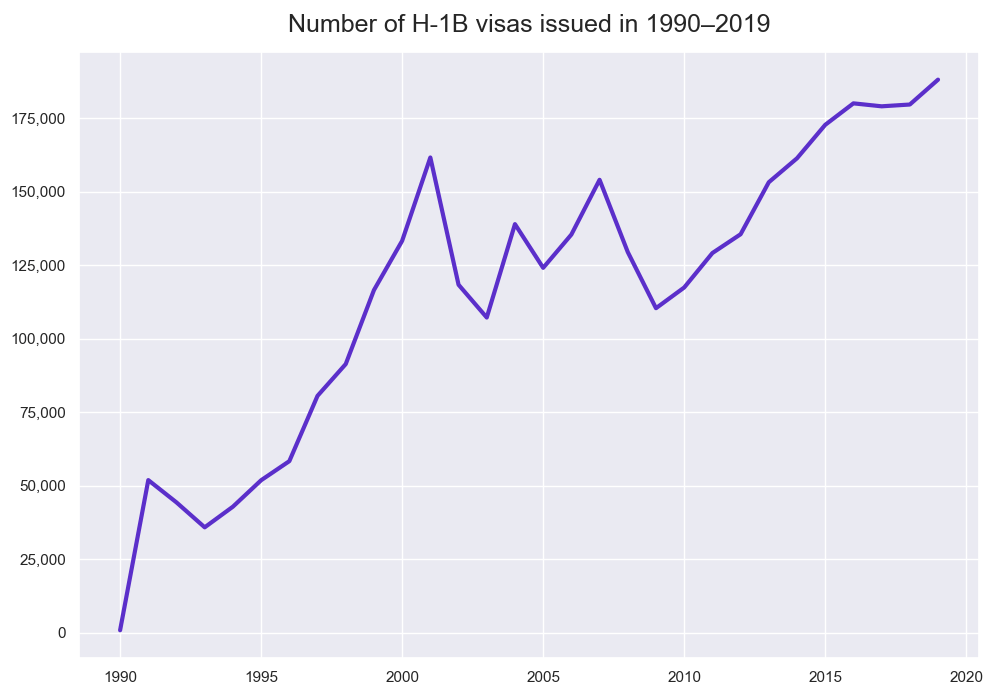 Which nationalities receive the visas most often

According to USCIS data, almost 72% of all H-1B visas in 2019 were approved for Indians and 13% for the Chinese. These categories of migrants account for 278,491 and 50,609 visas, respectively (including visas that were extended). Canadians come third with 1.2% of visas. All other nationalities are trailing far behind, each having less than 1% of approved visa petitions. 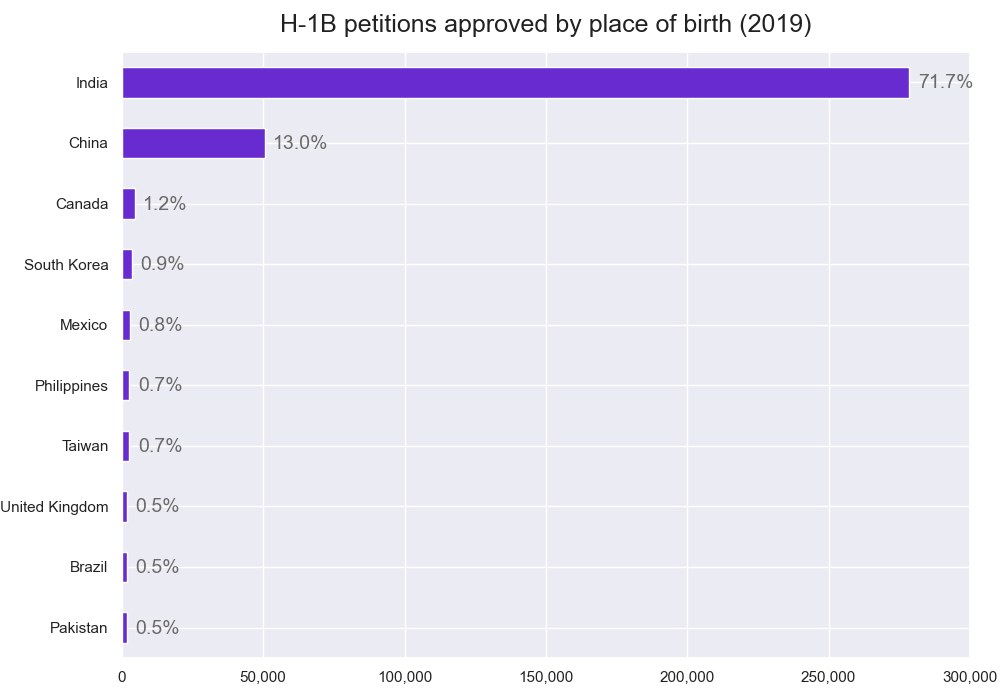 Interestingly, though, the United Kingdom makes the only European country among the top 10 states whose citizens got H-1B approvals in 2019.

About 65% of H-1B visas certified in the first half of 2020 account for the IT sector, with 8 companies out of the top 10 employers that requested H-1B visas being technology corporations (according to Myvisajobs.com data).

Almost 9% of visas (or 15,150) in the first half of 2020 were requested by Cognizant — an American multinational corporation that provides IT services and is headquartered in Teaneck, New Jersey. The company’s total number of employees in North America stands at about 46,400 as of 2019. 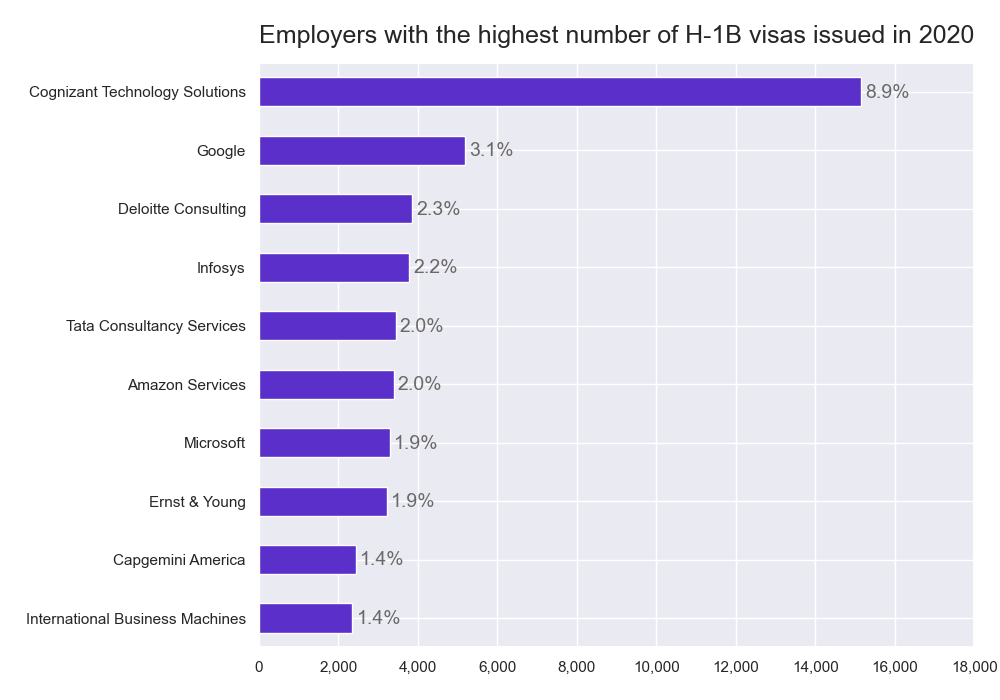 → IT companies that hire foreigners in the U.S.

Software engineers and software developers are the top IT occupations by the number of H-1B visas in the first half of 2020. They account for 7.5 and 5% of visas, respectively.

Senior systems analysts, IT managers, and senior software engineers also make the top 5 occupations, according to the Myvisajobs.com data. 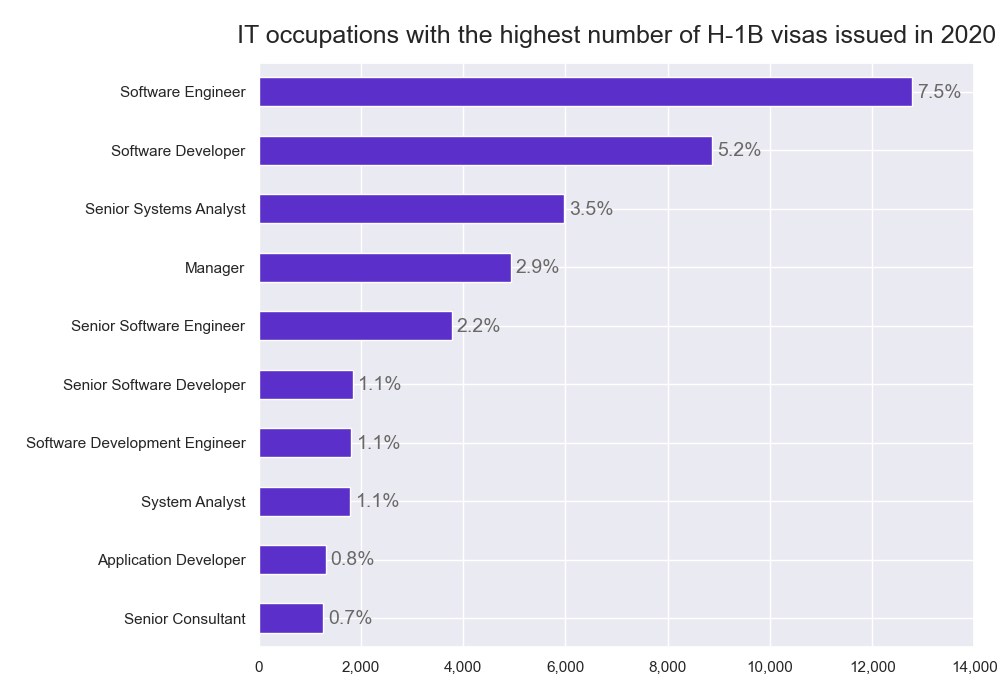 Where most H-1B visa holders are located in the U.S. 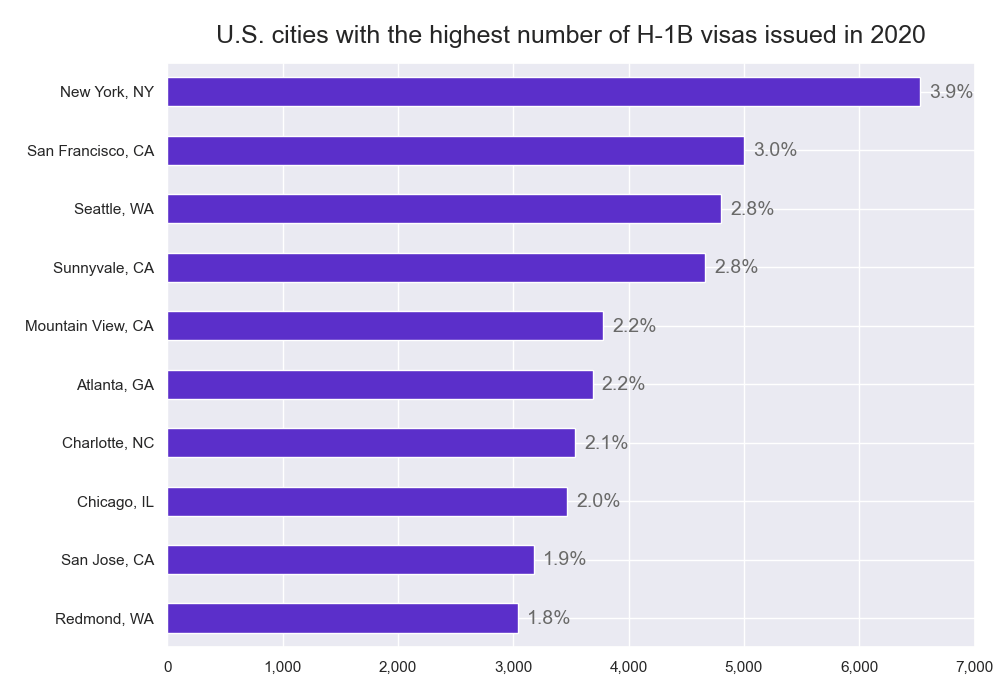 About 10% of visas in the top 10 were certified for workers employed in Californian cities: San Francisco, Sunnyvale, Mountain View, and San Jose, with the latter three forming the Silicon Valley with hundreds of tech companies and the majority of IT opportunities.

Other popular cities include Seattle, Atlanta, Charlotte, Chicago, and Redmond. 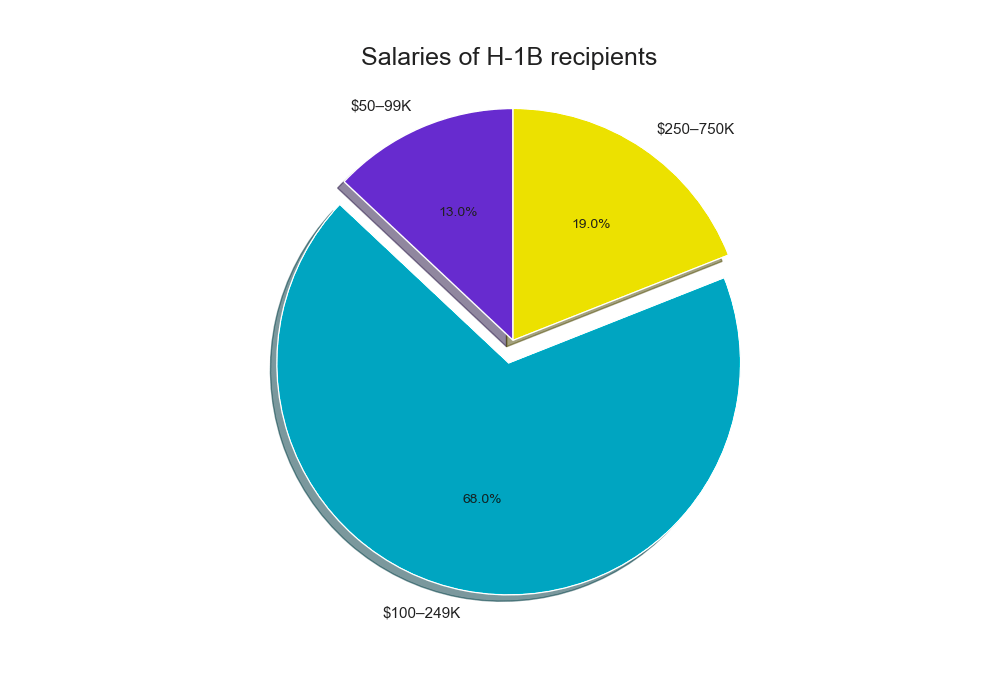 “As a result of more restrictive Trump administration policies, denial rates for H-1B petitions have increased significantly, rising from 6% in FY 2015 to 24% through the third quarter of FY 2019 for new H-1B petitions for initial employment,” according to a National Foundation for American Policy (NFAP) analysis of USCIS data.

IT service companies and consultancies, which normally place people at third-party locations, reported higher visa denial rates than U.S. technology firms. However, several tech companies had exceptionally high rates of visa denials. They include Cognizant (60%), Infosys (59%), and Deloitte (40%), which are also in the top 10 companies by the number of requested H-1B visas.

According to the U.S. Department of State, the top 10 nonimmigrant visa ineligibilities are the following:

However, many H-1B candidates seem to have received denials without any explanation, and quite a few of them are ordinary workers with no history of crime, misrepresentation or breaching visa rules.

→ Relocation process in the USA

Here are the key takeaway points:

Feel free to copy this report with an active link to ITShifting.com. Send any questions you have to info@itshifting.com.